We have been in Paris for four days and today we make our way south to the wine capital of Bordeaux.  Paris is absolutely gorgeous.  And the Parisians are wonderful.  People often say Parisians are rude and obnoxious, but we have only found them to be courteous, helpful and very relaxed.  Compared to Londeners, their consideration of fellow travellers on the Metro is first class, with people always getting up and offering seats to those in need (which apparently includes my two children).

We arrived on Wednesday, via the Eurostar from London, which was an immensely easy trip.  I must have fallen asleep while we were under the channel, because I missed it.  TMOTH (the man of the house) headed off to his bucks day and night (boys!) and the kids and grandparents and I traipsed around Paris.  In truth, the kids are too young for city site-seeing, but they have been troopers (literally) and have walked this city flat.  We had a lovely boat trip on the Seine, counting all the bridges we went under (Matt in Spanish – too much Diego), Arabella in Italian (from school) and me practicing my French.

We went to the Eiffel Tower, which is less impressive from a distance, and much more striking when you are standing right under it.  The queues for the lifts went on and on snaking under the vast iron underbelly of this amazing tower.  However, since we are unlikely to be here again in the near future, I decided to walk up the 760 steps to at least get up the tower.  Actually, I decided to walk up the first 300 steps to the first floor, but once there, I figured I may as well just go for it.  The kids had ice-lollies and a play on the vibrant green grass of the Parc du Champ de Mars with granny, granddad had a sleep on the very same, in the shadow of the tower and I walked and walked and stepped my way to a fabulous view of Paris.  The sun shone, the hours in the gym paid off and a blissful hour was had by all.

On Wednesday night I spent some time in the nightlife of the Champs Elysees, where everything was still open and doing a roaring trade at 2 in the morning.  On a Wednesday!  The Arc de Triomphe was lit up and it was beautiful. Romantic, historic, exciting.

Thursday was our day for serious site seeing and we started with a trip to Sacre Coure and Montematre for breakfast.  A beautiful stark church set against blue sky and a view of all of Paris greeted us at the top of yet another steep hill.  We meandered around the back to the artists square and ate a breakfast of croissants and oeffs (eggs) and watched the portrait trade set up for breakfast.  Afterwards, I got to spend the whole day on my own while Mike took the kids to a more appropriate kid site (an amazing science museum) and I visited the Louvre.  It is exactly as they say – you cannot see even a tenth of what they Louvre has to offer in a day.  And I would add it is best to come with a plan.  Braving the gazillions of tourists I decided (having done no research at all) to see the Mona Lisa.  I was mostly blown away by the building itself – truly awe-inspiring, with vast marble halls and ceilings that reach half way to heaven.  I traipsed up and down the cavernous halls in search of, what is supposed to be the worlds most perfect painting.  Past reams and reams of stark Italian renaissance art – with its religious themes and sexual undertones – following the crowd until I came to the Mona Lisa and a gaggle of tourists pressing forward for a photo (I annoyed a whole bunch of people by meandering my way to the front and literally standing and staring at the piece of art, rather than just taking a happy snap and moving on.)  I did however get the picture, as well. 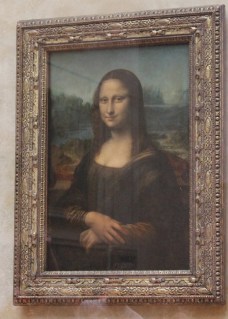 By some sort of miraculous intervention, on my way out, I ran into my mom and dad and so together we took a bus back up to the Hotel de Ville, and Dad went home while Mum and I shopped for shoes.  We shopped for shoes together in Paris!  Awesome! That night, Mike and I had date night, at a gorgeous little restaurant around the corner where the ambience was understated and the food was sublime.  They can cook, these French people!

On Friday, yesterday, it was the day of the wedding, the whole reason for coming to France.  We began the morning with breakfast at a French café, eating croissants and drinking café au lait.  Then we took the train out into the suburbs (past the ugly parts of working france) to a little village called Villenes sur Seine.  Absolutely quaint and gorgeous and green with cobbled streets and old houses and only 20 minutes from Paris on the train.  Why wouldn’t you live there?  The wedding was lovely.  Very unique and special.  It was set in the green garden of a friend of Matt and Lisa’s, under the heavy boughs of an old fruit tree.  The tears were thick and heavy from everyone as emotions ran high, the wine was unbelievable, the cheese was exquisite, the company great.  All in all, a very successful event we feel blessed to have been a part of.

And so onto the Dordogne via high speed train!