The magical allure of New York

“New York, concrete jungle where dreams are made true…” 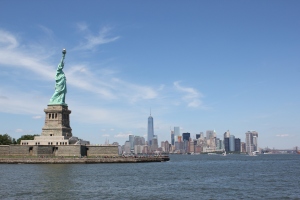 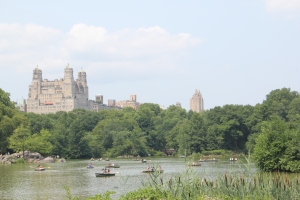 We’ve just been to New York. The city of dreams, home to hopes of fame and glory. The subject of famous crooners and the backdrop to countless movies, TV shows and adverts. A city so familiar from reruns of Sex in the City and Law & Order, that it feels like we’ve been here countless times before.

Everyone sighs, upon hearing of our holiday plans, “Oh, but I love New York”, even when they’ve never been there before. It captures the imagination, this crowded city, with its iconic buildings and love of theatre and unshakeable belief in its own intellectual superiority.

In truth, it’s a funny place, New York.   Up close, it’s old, faded. The roads are dirty and full of potholes, the infrastructure weary and dated. The metro system is so antiquated, so user unfriendly, it would fit in any third-world city. In the sweltering heat of mid-summer, New York smells; the sweet, sickly smell of sewerage wafts up in a rush of hot air as a train squeals past underground. (Did Marilyn Monroe want to screw up her nose during that infamous billowing white dress photo?)   Broadway is jam-packed with desperation, crowded with peddlers of tourist paraphernalia, sad cartoon characters stealing hugs and demanding tips, would-be opera singers consigned to renditions of Happy Birthday in nearby restaurants. Poverty is equally rank, and the inequality between races obvious and disconcerting.

And yet, somehow, New York is still magical.

We wander down the wide avenues and narrower streets that make up the determinedly checkerboard layout of this city. Walking in the shadow of the high rises that create the famed New York skyline feels like we are walking through a concrete forest. These tall symmetrical constructions with their repeated window patterns reach to the sky and dominate the spirit.  In downtown Wall Street, the stock exchange building, sparkling clean, feels like a temple to money.

But, in the same day, we stray into the villages, where the feel is completely different. We find Chelsea Markets as we meander down the High Line. Later on, we walk across Central Park, this marvellous green heart to New York. As we step into the dappled shade, it is as though time slows down. Suddenly, the air is fresher, and the pace less frenetic.

There is so much to do in New York, and something for everyone’s taste. While it is not really the place for kids, we still managed to keep them happily busy. But some of my particular highlights included having a glass of wine on the roof garden at The Met, watching the colours change over Central Park in the early evening light. Seeing the Andy Warhol exhibition at MoMA. His 32 soup cans felt more spectacular because it was in New York.   A matinee showing of Aladdin on Broadway was worth fighting the jetlag for. And we had huge fun on a night out in an Irish pub, complete with thatched roof, crammed between two buildings. But what I liked most about it was the 2am taxi ride home through the lights of Broadway. It is the bright lights of this magical city that have the most allure, that capture the imagination and pull on the heart strings of millions of people across the world.

Oh, how I love New York.

One response to “The magical allure of New York”