In the far north of Sweden lies a little town called Kiruna.  A small town it might be, but it is home to the biggest iron mine in the world, and, more importantly for us, the staging point for three days’ worth of arctic adventures.

As the plane descends, the heavy cloud cover gives way to a magical landscape beneath us.  An endless white canvas, criss-crossed with black forests of trees huddled together in the cold.

We land on a snowbound runway and taxi up to the small red wood building that serves as airport.  A cab takes us along snow bound roads to the town centre for lunch. The driver is not local, apparently.  He’s only been here for 40 years.  First stop, some lunch at a café, where the menu board is hard to decipher and even google translate struggles.  But, the young staff behind the counter happily switch to English, and go out of their way to provide allergy friendly food to my son.   He gets tacos, which seems a bit ironic.

In the settling dusk (around 2pm), as the world glows pink, we walk back to our lodgings, a delightful B&B not far from the town centre.   This town has a unique feel to us, different to anywhere we have visited before.  The roads are wide, the buildings a mix of soviet-flavoured symmetrical blocks and more traditional two story wooden houses.  Everything is expansively spaced apart, and there is snow everywhere, piled on everything, mounds of it swept up into mini-mountains at intersections.  Remnants of Christmas twinkle in star-shaped candles in uncurtained windows.  It’s a cultural thing, these exposed interiors of people’s homes, a throwback to a puritanism that demanded people be able to see inside your house as they liked.  Apparently this helped inhibit sinful desires, like having sex on the kitchen counter.  Doors are kept unlocked for the same reason.

You might wonder what there is to do in such a place, out on the edge of the arctic, where the temperature dips to -26 degrees? 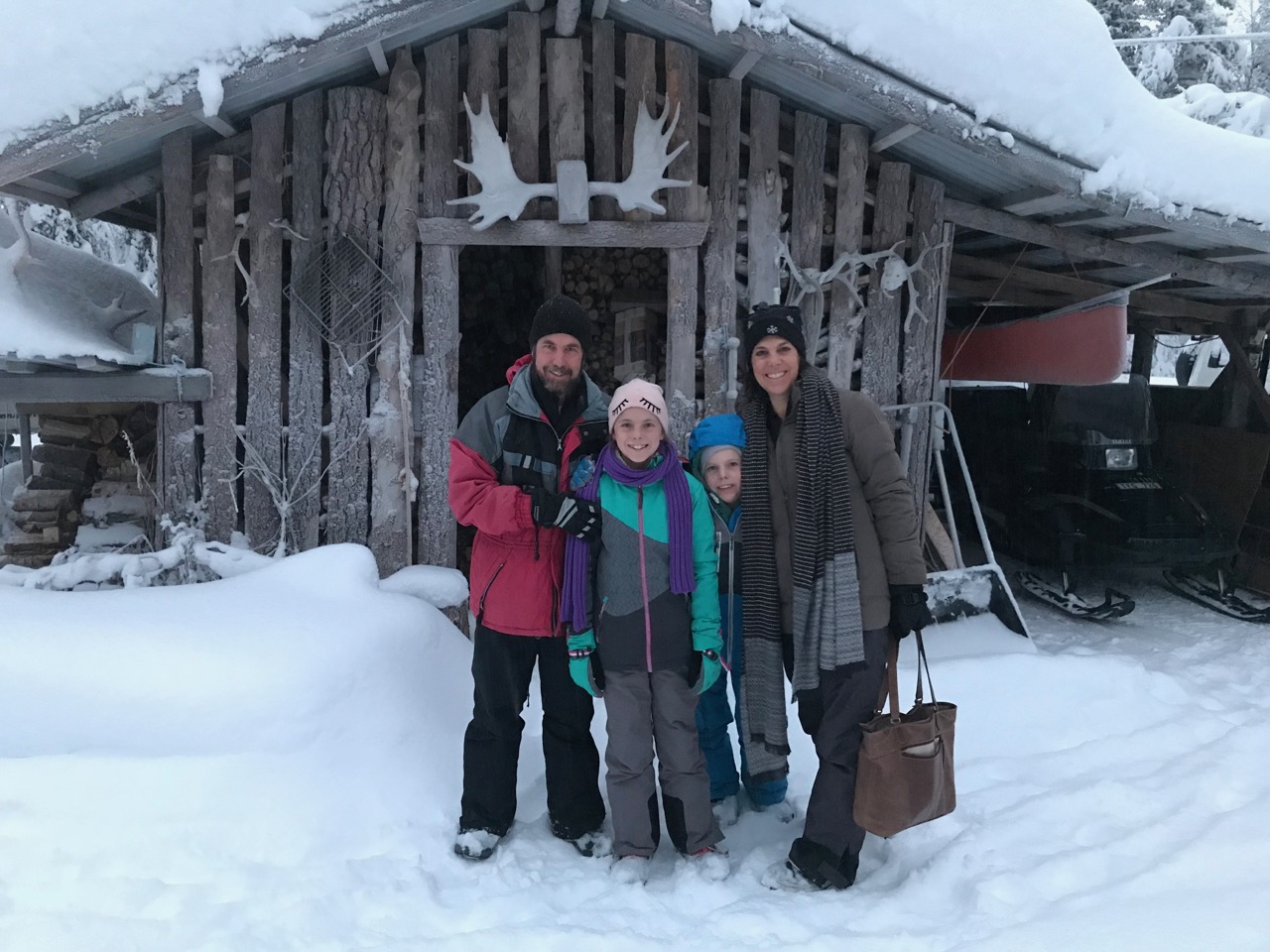 Firstly, you go dog-sledding.  This was by far our most delightful experience, and I suspect choosing your provider wisely makes quite the difference. We opted for a drive-a-sled tour with Husky Voice.  Stephanie takes out a maximum of four people – which meant it was just our family on this trip – the sort of tour we much prefer.  The kids ride up front with Stephanie, taking turns to stand with her and drive the sled.  Mike and I drive behind on the second sled, attempting to obey the two-second rule, which applies as much to huskies on the run as trucks on highways.

Before we begin, Stephanie suits us up in her utterly delightful wooden cabin, bedecked with fairy lights, heater roaring.  Thick overalls, even thicker boots, balaclavas, fur lined hats and gloves get added to the top of our existing ski gear.   This is despite her assurance that at -8 degrees, it is a warm day.  We look like blue marshmallows, warm and fat.

The dogs and sleighs wait for us in the forest, a winter wonderland of snow drifts and Spruces, branches drooping heavily beneath the weight of the snow that continues to fall.   It takes a while to harness all the dogs correctly, there are a fair number of them, and they bark and yip incessantly with excitement.   The womb like silence comes as somewhat of a surprise once we set off.  The dogs cease their cacophony of howls as one, intent on their task and all we can hear as we glide through the forest is the slushing of the sleds and a rhythmic panting from the dogs. 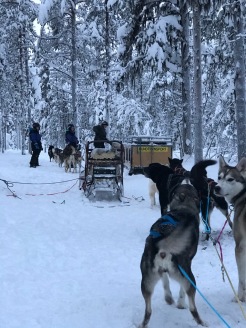 There is something magical about this monochromatic, ethereal landscape of muted sound and diffused light, like we’ve stepped through the back of the cupboard and into the land of Narnia.   We travel through the forest on recently cleared trails, the snow thick on either side.  Near a lake, frozen, we pause to watch a distant reindeer, eyeing us cautiously.  We plough through deeper drifts that require us to help out our furry friends with a scooting push.  Towards the end of our run, we fly across the ice-bound river and come to a rest at Stephanie’s river hut – a clever invention pulled out onto the snow each winter, and returned home for the few months of summer when the river runs.  While she lights the fire and cooks some delicious sausages we commune with nature, play with the dogs, throw snowballs and wallow in the snow up to our knees.

The dogs are magnificent beasts, gorgeously attired in their fur coats, intelligent, affectionate and patient.  They are the masters of this domain, and happily share it with us in return for pats and cuddles.  When we finish lunch, the sky is softly bruised with the mauve tinge of returning twilight.  This stark landscape feels the epitome of majestic beauty.

Next up, the Ice Hotel in Jukkasjärvi.  Despite being an utterly touristy (and breathtakingly expensive) thing to do, it too is a magically different experience.  The hotel itself is fascinating, with its “snice” (snow and ice) walls, towering ice-blocks and ice-chandelier, but the real magic lies in the artist-rooms.  It is a little like exploring a very cold art gallery.  In several of the rooms, artists have spent two weeks carving fantastical creations out of ice – from astronauts to an ice-queen, a bar of drunken block men to a bed in the arms of King Kong.   You can pay to sleep in the ice-hotel, but I can’t imagine how one would get any sleep at -5 degrees on a bed of ice.  The visit was enough for us, rounded off with a drink in the ice-bar.  Champagne ice-glass, with bubbles?  Don’t mind if I do.

Just down the road from the Ice Hotel, we visit the Sami Museum.  Sami are the indigenous peoples of this region, and this outdoor museum provides detailed information on the traditional Sami way of life.  In the dark, we tromp through the snow peering into various tents which have different functions depending on the time of the year.  I start to appreciate the value of reindeer skins, which are waterproof and warm as toast.  We learn about the reindeer rhythm to which Sami life adheres.  All the reindeer in the arctic belong to the Sami people, and life revolves around the reindeer and their breeding cycle.  They keep some reindeer in an enclosure, so we get a close up view of these comic looking animals who can sniff out food at a hundred paces and aren’t afraid to come and take it from you.

Next door, free to enter, is the Jukkasjärvi Church.  I love churches (although only when empty of preachers), and this one is storybook gorgeous.   The red, almost barnlike structure is simple yet striking against the whiteness of the snow.   Apparently it is the oldest church in Swedish Lapland.  The Sami religion, through the usual application of threat and coercion, is now mostly Christian.  Gone are the drums and ancestral rituals that were once used to commune with the dead, but a sense of that wild spirit communing with nature still resonates in the pictures on the walls.  No realistic European depictions of devotion, these are vibrant explosions of colour, cartoon-like.  They remind me of similar paintings in Cusco, Peru.

We also visited Kiruna Church, which is a spectacular building, beautiful, red and angular, apparently designed with a traditional Sami tent in mind.  It is a series of triangular shapes that converge into a central soaring apex, creating space and light inside.  There is an impressive organ, an abundance of dark wood and the smell of pine forests in the early morning.  We have it to ourselves, this calm and peaceful space, and end up in a deep and meaningful conversation with our children, about life and why people buy into beliefs that make no moral or logical sense.  A peaceful way to pass half an hour before heading out to dinner.

On the advice of Lynn, who runs the B&B we are lucky enough to stay in, we hire a car and spend a day driving along the frozen river towards Nikkaluokta in search of wildlife.  What a luck to encounter three clippity-cloppity reindeers trotting down the road on their multi-jointed legs.  They look just like Disney has sold them to us, and all that is missing is the red nose.

We find a bridge across the only part of the river that doesn’t freeze over, and step outside the car to take a photo.  A quick photo.  Very quick.  Somehow, here were the water still runs, it is colder than further down the river.  I take my gloves off to take a photo of the distant mountains, and in moments cannot feel my fingers.   Back to the car post-haste, heater blasting.  It is easy to imagine dying from hypothermia. 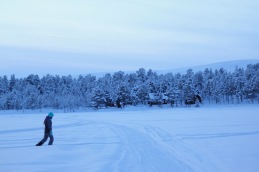 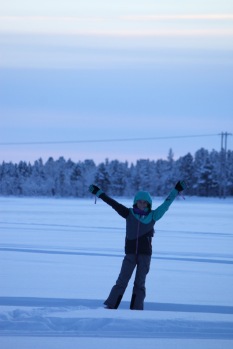 Of course, the main reason we came up with the mad-cap idea of visiting this part of the world was the allure of the Aroura Borealis.  Although it is a low point in the solar cycle, and it was cloudy for two of the three nights, as luck would have it, on the night I booked us in for a snow-mobile adventure, the sky cleared.  We were lucky enough to get a glimmer of the aurora.  Just a shadow of its marvellous self, but enough to say we have seen it and we want more.  It is the only redeeming feature of the snow-mobile trip, which was our least favourite thing we did.  We did it as part of a tour with about 16 other people, the drive was slow and stop-start and it was utterly freezing.  To drive along with your nose peeking out of your balaclava at -26 degrees isn’t fun, and we all ended up with bright-red frost-nipped noses at the end of it.  Still, we saw the green glow in the sky, and for that it was worth it.