Stuck in suburbia, it is easy to forget how vast and incredibly beautiful this marvellous land of ours is.  Caught up in nonsense of our own making, we lose sight of what really matters. While the news is full of sorrow and hate, of ideologically motivated distrust and ego driven politics, nature proceeds onwards, as it has done for millions of years, and, through utter happenstance, leaving spaces of spectacular beauty that we are able to enjoy and appreciate – should we so choose.

That’s why it’s good to get out and experience the true nature of life itself.  To feel the sand, ground down and pooped out by parrot fish, between your feet.  To watch the beady eyes of a stonefish, and remind yourself that the malevolence in his gaze is a story of your own making.  To dive into the cold embrace of a turquoise sea, brilliantly blue and teaming with life, and see a turtle emerge from a cleaning station.  Another reminder of how life is a synchronised evolution, a beautiful ballet of adaptation and balance played out over millennia.

This is what our trip up the coast of Western Australia was about.  An immersion in nature.

Travelling to the Ningaloo Reef from Perth is an exercise in patience.  In our camouflaged campervan, we motor through a round trip of 3000 kilometres, down endless stretches of road through an often monotonous landscape to find the gems strung out along this small portion of the Western Coast of Australia.

The highlights are endless.  It’s a trip that needed a month, rather than 12 days.   But there are several standouts that live in my memory and bring a smile to my face when I think back to them. 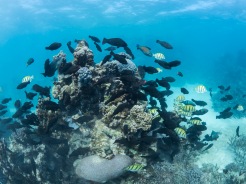 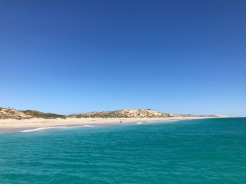 This small beach town had no space for our campervan, so it was a day trip affair.  We overnighted at 14-mile beach beforehand, and returned to Canarvon the following day.  It’s a tip worth noting if you are heading there to camp.  You need to book months and months in advance in the school holiday season.  Despite the campsite busting at the seams, the reef is largely empty, and we feel like we have the place to ourselves.  The staggering colour of the sea is a thing of exquisite beauty.   Below the waters, coral bommies team with life.  We spend the day on the water with a passionate crew from Ningaloo Reef Dive.  The display of nature is spectacular, but what warmed my heart more than anything was watching the kids discover a joy for being beneath the sea.  Snorkelling like professionals rather than first timers in a coral garden teaming with fish and turtles and sharks.  And no, they didn’t freak out.  They swam closer for a better look.  (Clearly they don’t have my freak-out genes).  Our once in a lifetime experience was snorkelling with a Manta Ray.  A thing of magnificence and glory, gliding effortlessly below us along the white sandy floor of the ocean. 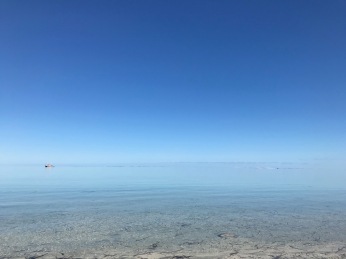 We stopped on this peninsular for three days and enjoyed every moment of it.  Learning about dolphins at the early morning Dolphin Feeding, and watching the smile on my son’s face as he was chosen to feed one of them was a standout experience.  But it was the peace of the place that really settled my soul.  From the beach, the water is clear enough to see through, and its almost impossible to tell where the water ends and the sky begins.  It was so still and flat and shallow, that the paddle board was put to good use by the kids, who headed far into the distance on concocted tales of adventure and discovery.  Along the way they found a turtle and saw dolphins, and it was only later that I realised they were lucky not to encounter a Lemon Shark.  It is called Shark Bay after all, and while they wouldn’t have been in danger from it, it would be a scary thing to have swim underneath you.  Visiting the very quaint Ocean Park Aquarium and learning about sharks and stonefish and the sobering reality that our inability to clean up after ourselves will render turtles extinct within 20 years was yet another highlight of the trip. 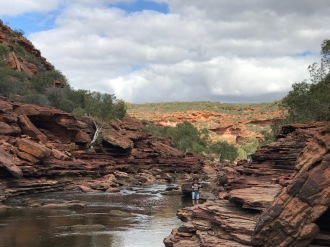 The Kalbarri is closer to Perth, and bordering on the open ocean.  The wind whips off the dancing sea and although the sand is white and the sun is shining, we found it a bit too wintery for a dip in the sea.  However, the scenery in this part of the world is gorgeous in a completely different way.  In the Kalbarri National Park, red rock formations and deep gorges have been carved out of the landscape by the Murchison River.   Natures Window was crowded, but we headed further in and clambered down to the river itself through rocky crevices both wide and narrow.  A sunset walk along the cliffs from Grandstand Rock Gorge to Island Rock, not only gave us spectacular views of the rock formations out to sea, but also the chance to spot a parade of whales, water from their blowholes dotting the horizon.   At this time of the evening, as the sun dips towards the horizon, the whole world turns a warm and dusty orange.  With a glass of wine in hand, we watch as it sinks into the sea, the sky turn purple and day turn into night.

At this point we are approaching the end of our holiday.  We are relaxed and the sense of peace that comes from being away from it all is palpable.  We are in the company of people we love, soaking up the beauty and wonder of nature, formed and reformed tirelessly over billions and billions of years.  This moment will pass, like life itself, but resting in the moment, being in the moment, is peaceful.  I find great capacity for calmness in accepting that despite being a momentary blip in life’s inextricable story, we have the, perhaps unique, capacity to appreciate the world around us.  To enjoy it.  If only we make the time and the choice to do so. 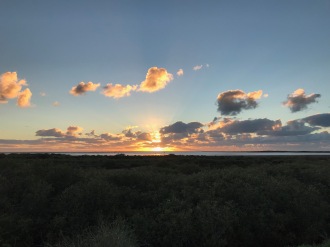