Our first night in the campervan passed pretty uneventfully. Neither child fell out of the top bunk, despite my grave concerns, although one of them knocked a torch to the floor at about 3am and gave us a serious imitation of a heart attack.

I tried to make an early start of it, wanting to make the most of our time at the zoo, but the second thing I learned about road tripping is that there is no hurry up. Despite rousing the troops at 7am, by the time we had all had breakfast and got dressed, washed up and packed up the camper van, it was 9am before we were ready to go. I kept telling myself to relax. We were on holiday after all.

The Zoo in Dubbo is part of Taronga Zoo and is a quite amazing feat of, well, zooism. There are no cages between the people and the animals, rather the zoo uses ditches and moats to keep the contained. While its not the wild, the animals are given a lot of space to roam around in and are clearly looked after incredibly well. 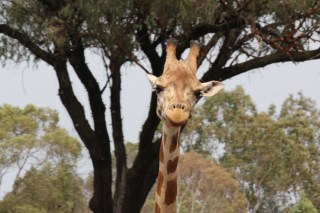 More importantly, they work hard to educate everyday people about the diversity of wildlife on our planet and to give them an opportunity to see animals they might never see in the wild. All of the profits go towards conservation efforts and they work across the world – from Rhinos in Africa to Tigers in Sumatra – to conserve wildlife, deter poaching and raise awareness about the destruction of habitat that is leading towards the extinction of these animals. To this end, may I encourage you all to petition the government to make law the labelling of “palm oil” and to avoid buying products which have palm oil in them.

We decided, somewhat optimistically, considering Mike and I haven’t cycled anywhere for at least a year, to bike the 6km around the zoo. We hired two tandem bikes, so there we were, with a kid behind each of us, puffing our way from exhibit to exhibit. Spring babies were apparent in many of the enclosures, the cutest being tiny little meerkats. I loved seeing the black rhino. More than anything this reminded me of South Africa and our visits, as children, to game parks in Natal, where rhino were a main attraction. Rhinos always remind me of my Dad, who I think had a bit of rhino in him! 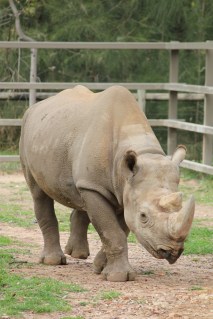 A highlight was viewing the tiger feeding and listening to the talk about tigers. I am not a big fan of your regular house cat (thinking about them and my nose is already starting to itch), but I love the big cats. The tiger in particular is so beautiful and predatory. They have intelligence in their eyes and a sense of power in their every move.

They say you need two days to go around the zoo, but we feel like we pretty much covered everything we wanted to see in one. There is of course a lot more to do in Dubbo than just the zoo – but we never got there. Rule 3 about road tripping, make time to chill. So, after we peddled like mad around the zoo, we rolled our little house on wheels back to the campsite and the kids went for a swim and a play on the jumping pillow. They got to go to the playground and back by themselves, so I think they were feeling very responsible, independent and grown up. (And this in turn was a highlight of their holiday. Go figure.)

That night, the storm that had been brooding all day hit and it poured and poured with rain, pitter patter whoosh whoosh on our tin roof. Rather rhythmic and sleep inducing. Thank goodness we were in a campervan and not a tent!