Minus One. Yes, that is the temperature it got down to on our first night in Mudgee. When we awoke we found car windows covered with a layer of ice glistening in the morning sun. Clearly spring in this part of the country means icy-cold nights, even though the days turned out to be quite bright and warm. If you are coming up this way, best to pack your winter pyjamas.

Mudgee, to my mind anyway, is not particularly child focused. This is gourmet food and wine country, a place for romantic getaways. None-the-less, as this was a holiday with our kids, we determined to ensure everyone got something out of the day. First stop, cheese. Second stop too, as it happened.

To start we did a flyby visit to High Valley, which was brimming with people and noise and bustle and harried staff. A quick cheese purchase and we moved onwards to Leaning Oak, a far less polished and definitively more ramshackled place. However, with a plethora of goats to look at, it was a much more interesting stop for small people. We were lucky enough to be there at milking time, and Fiona let us through the mud, amongst the boisterous goats and into the milking shed where she very kindly explained the process to our rather wide-eyed kids. It was a great opportunity to also give Matt a visual example of what we mean when we say he can be as stubborn as a goat. Certainly, stubborn goats were on display. The cheese was delicious and very fresh, having been in a goat, apparently, not 48 hours before. 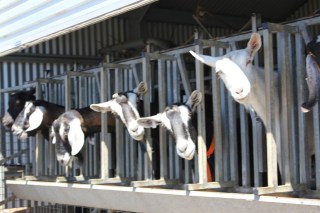 On a recommendation we visited the Pieter van Gent Vineyard, which was, as promised, gorgeous. We entered through an oversized wooden door and went down a long corridor between huge barrels of wine to get to the tasting area which was warm, welcoming and staffed with very knowledgeable, friendly people. We tasted everything on offer and bought a few examples to bring home. But the real joy of this place was not the rustic wooden beams or antique choir stalls, the rich smell of wine being fermented nor the size of each serving. Rather, it was the provision of a large blackboard and chalk, which kept my two entertained for at least 20 minutes. Simple, but wonderfully clever. 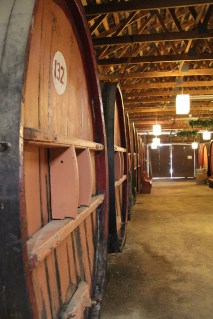 Onwards we traipsed across this fertile countryside to visit the town of Gulgong, an old gold mining town that was once home to Henry Lawson and which spent 30 years on the ten dollar bill. The colonial architecture has been deliberately preserved, and the wide streets, low buildings and corrugated iron roofs made us feel like we were walking onto a movie set. The kids did the swaggie symbol trail, which entertained them a lot more than the trip through the Henry Lawson Centre did (even though they got to ring his old school bell). Go figure. 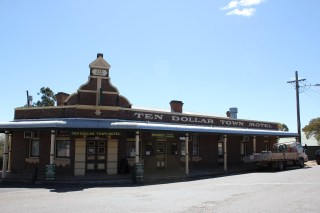 That evening, after a rather abortive attempt to make damper (we ran out of time), we headed into the hills to the Mudgee Observatory. The Mudgee Observatory is an shining example of how passion creates things. As we bumped and jolted along a dirt track, our headlights bouncing off the trees that surrounded us, I did wonder where on earth we were going and whether anyone would ever find us again. John met us and several other families as promised, and we followed his red torch up the hill. I had thoughts of us sitting around on a barren rock while someone pointed at the sky, which was brilliantly clear and full moon bright. Imagine my surprise then as we crested the low rise to find several domes, telescopes and a massive shed dedicated to all things space. It was wonderful. John, an ex-NRMA mechanic, showed us so many things and was brimming over with knowledge about the sky scape. For the first time in my life I saw scorpio. We looked at both Antares (the 16th brightest star in our sky) and Sirius through telescopes. Mars was present in full red glory. Because the moon was so bright, it made star gazing harder than normal, but we got to view the moon close up which was quite an amazing experience. I love looking at the stars. There is something quite humbling to realise how minuscule we are in the scheme of things. It gives a bit of much needed perspective, and I think we could all do from stopping and sitting for a while, faces to the skies.